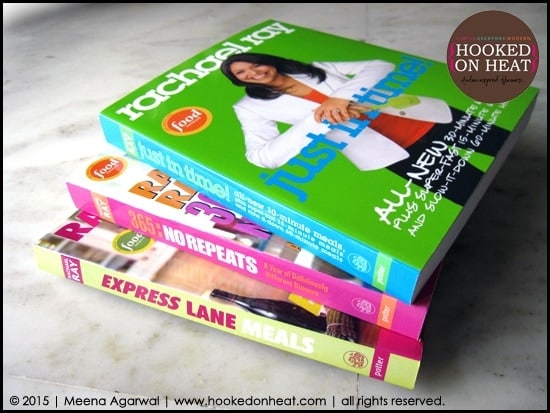 A couple of weeks ago, I picked up a stack of Rachael Ray’s cookbooks on a whim, including, 365: No Repeats, Express Lane Meals and Just in Time. As someone who devours a cookbook akin to the latest bestselling bedtime read, I was excited to dig right in. But on the other hand, as someone who can’t resist the urge to flip the channel whenever RR has one of her umpteen show reruns on, I was a bit skeptical.

One thing I have to hand out to her however – she’s one helluva creative cook! And I mean that in the most nicest way I can. A quick glance through her list of recipes can’t help but pique your interest and tempt you to flip over to the particular page. If you thought she could only get creative with naming her dishes, wait till you actually read through the recipe itself! How many times have you found yourself cooking your tried-and-tested favourites week after week – not because you enjoy them that much, but because you’re stumped for ideas! I know I’m guilty of doing so. If anything, these books have taught me to throw caution to the wind and get even more creative with my cooking. Her recipes encourage you to think outside the box and opt for unconventional ideas. While she does pair many classic flavour combinations together, her way of planning a meal around these flavours is what most appeals to me. It’s fun, fast, and makes for a great evening of cooking!


Rachael Ray certainly knows her way around the kitchen. If you’ve ever watched an episode of her 30-minute meals cooking show, you’d notice how Rachael always put a stress on having a well stocked fridge, freezer and pantry. That, equipped with simple fast cooking tricks enables her to create a whole meal in a matter of minutes. The same goes for the recipes in her books as well. Many of her recipes combine stove-top cooking with a final few minutes of finishing in the oven to get that baked goodness. She uses ready-made stocks and sauces as a starter and flavours them as she goes along, cutting down on cooking time and adding a personal touch as well.

Going through the three books, I couldn’t get myself to believe that there were many distinctions between them – which is why I’ve opted to review them as a batch instead. My honest assumption would be: if you’ve read one, you’ve read them all, and unless you’re a die-hard fan of Rachael, and want to own everything with her name on it, you might just be happy with owning only one.

The weekend's here and for us, that means firing u

Hopped on the bandwagon! 😁 So, who’s #btsarmy

Indian-style Spiced Grilled Corn or Bhutta is one

All throughout high school, whenever I was asked w